To share your memory on the wall of Mike Spurgeon, sign in using one of the following options:

Provide comfort for the family of Mike Spurgeon with a meaningful gesture of sympathy.

Mike W. Spurgeon, rode off into his final sunset on Sunday, March 24, when an oncoming vehicle veered into his police car, also carrying his eldest son, near Bardwell, Texas.

Mike sauntered into our world on Oct. 1, 1951, in Ardmore, Ok... Read More
Mike W. Spurgeon, rode off into his final sunset on Sunday, March 24, when an oncoming vehicle veered into his police car, also carrying his eldest son, near Bardwell, Texas.

Mike sauntered into our world on Oct. 1, 1951, in Ardmore, Ok. After galloping around with his parents and three siblings, they all settled in Irving, Tx., in 1963. Irving was home to him, his first wife, and their three children for many years but he was blessed enough to find love again after his first went to Heaven. Mike and his wife, Shannon, have been making their mark in Bardwell since 2006 where he began his career as a law enforcement officer in Princeton, Tx., in 2000. He became Chief of Police for the Bardwell Police Department in 2005, where he was the epitome of gentle leadership, gracious servantship, and generous protector. His unparalleled legacy can be heard, seen, and most profoundly, felt amongst the Bardwell community and all of his remaining loved ones.

Mike strolled hand-in-hand through the Lord's Gates with his eldest son, Michael W. Spurgeon, Jr., and was met by his initial great love, Linda Spurgeon, and his parents, Botie and Elladine Spurgeon, as they preceded him in death.

Contributions in his honor can be made to Michael W. Spurgeon, Sr. GoFundMe.

For lodging accommodations, La Quinta Inn & Suites, DFW Airport South has kindly blocked a set of rooms with double beds at a discounted rate. When contacting them at 972-252-6546, extension 5, please mention the "Spurgeon Family" for access to this rate and these rooms.

We encourage you to share any memorable photos or stories about Mike. All tributes placed on and purchased through this memorial website will remain on in perpetuity for generations.

Andy and Daena Martinez, Kathy & family, Billy & family, and Sally & family, and others have sent flowers to the family of Mike Wayne "Mike" Spurgeon.
Show you care by sending flowers
Hand delivered by a local florist
JK

Your husband was a remarkable person and will be missed. Know that you are in our thoughts and prayers.

Andy and Daena Martinez purchased the THINKING OF YOU BASKET for the family of Mike Spurgeon.
Order Now | Why Order Through Us? | Show All
Comment | Share Posted Mar 29, 2019 at 01:00pm via Floral Arrangements
JM

I am deeply saddened by the loss that you, your family, and the community have encountered due to the tragic event. My deepest condolences to the many lives that Michael's life has touched. A true pillar of Society. A servant of our loving Lord.

Judy McDuffie -
Related to the other victims 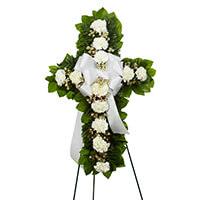 Kathy & family, Billy & family, and Sally & family purchased the STANDING CROSS-WHITE for the family of Mike Spurgeon.
Order Now | Why Order Through Us? | Show All
Comment | Share Posted Mar 28, 2019 at 01:54pm via Floral Arrangements

Ordering through us helps ensure your order will be placed through a local flower shop with whom the funeral home has a personal and trusting relationship. Through this service, a card with a picture of your selection will be included so you are able to leave a longer message of support to the family with your thoughtful gesture. Also included is a photo of your arrangement and message which will remain in perpetuity within this memorial website.