To share your memory on the wall of David W. Herman, Sr. , sign in using one of the following options:

Provide comfort for the family by sending flowers or planting a tree in memory of David W. Herman, Sr.

Provide comfort for the family by sending flowers or planting a tree in memory of David W. Herman, Sr.

Left to cherish the memory of David is his wife, Patricia, his children, grandchildren, great grandchildren, brother, Hardie Herman, and numerous extended family and friends who will all miss David dearly.

A graveside service with military honors will be held 10:30am, Thursday, December 10, 2020 at the Dallas Fort Worth National Cemetery 2000 Mountain Creek Parkway Dallas, TX 75211.

I lieu of flowers family would like donations be made in David's name to St. Jude Children’s Hospital
Read Less

To send flowers to the family or plant a tree in memory of David W. Herman, Sr. , please visit our Heartfelt Sympathies Store.

We encourage you to share your most beloved memories of David W. Herman, Sr. here, so that the family and other loved ones can always see it. You can upload cherished photographs, or share your favorite stories, and can even comment on those shared by others.

Flowers were purchased for the family of David W. Herman, Sr. . Send Flowers

Posted Dec 03, 2020 at 09:36pm
David was boss at Standard Mfg for many years and we enjoyed many fishing trips together. One freezing cold Saturday morning, we took David's small bass boat to Lake Fork to enjoy the cold day fishing. Now this is a long story, but I am going to cut it short. We each had on layers of clothes for wafmth...it was nice...but, we both got our lures hung up in a big tree. The next thing I knew, I went head first into the freezing water. While trying to surface I knew was going to be ok since David could help me back into the boat. However, while surfacing, I ran into David who was also in the freezing water. I managed to get into the boat and started it up and pulled David through treetops and moss to get to the shore. I still am not sure how David did it, but he had a bonfire going in about 5 minutes so we would not freeze to death. Needless to say, this is where a bonding friendship began...happy to be alive! He will be missed by many but we have some cherished memories of which we will always keep close to our hearts. Sincere sympathy and prayers for the family.
Larry Yates
Comment Share
Share via: 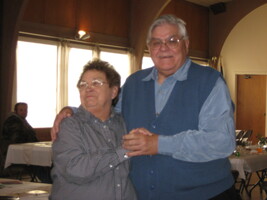